In 1942, the RAF moved out and the United States Air force arrived:

These squadrons were to stay briefly and by the end of November 1942 they were gone.

In January 1943, the RAF returned with the 17.OTU, flying Blenheim Bombers. In April 1943 they departed.

Rumours were rife that the Yanks were coming back. Which they did.

The 355th Fighter Group arrived at Steeple Morden Airfield, which they renamed Station F -122. The first commander of the 355th was Lt. Col. William J. Cummings.

Under his command were:

Steeple Morden was also home to the 2nd. Scouting Force. This group of brave pilots flew ahead of the bombers and radioed back weather information and enemy aircraft positions, saving the lives of thousands of bomber crews.

The 355th received a unit citation for their extraordinary heroism and outstanding performance. They were the highest performing Group, destroying aircraft on the ground, earning them the nick name the’ Steeple Morden Strafers’. In July 1945, the 355th departed to Gablingen, Germany to become a part of the Army of Occupation.

Following the departure of the 355th the airfield was taken over by the 4th Fighter Group, who stayed until November 1945, when it was handed back to the RAF.

The airfield was closed in September 1946 and was offered back to the original owners.

During their stay, the 355th made firm and lasting relationships with the communities of Steeple Morden and Litlington. A memorial stands on the Litlington Road, dedicated in May 1981 to the brave men who served at Steeple Morden. In 1993 a beautiful stained-glass window was dedicated in St. Catherine’s Church, Litlington, to the 355th Fighter Group. In 2003 the memorial was extended to take in the names of the 355th and RAF personnel who died serving at the airfield. 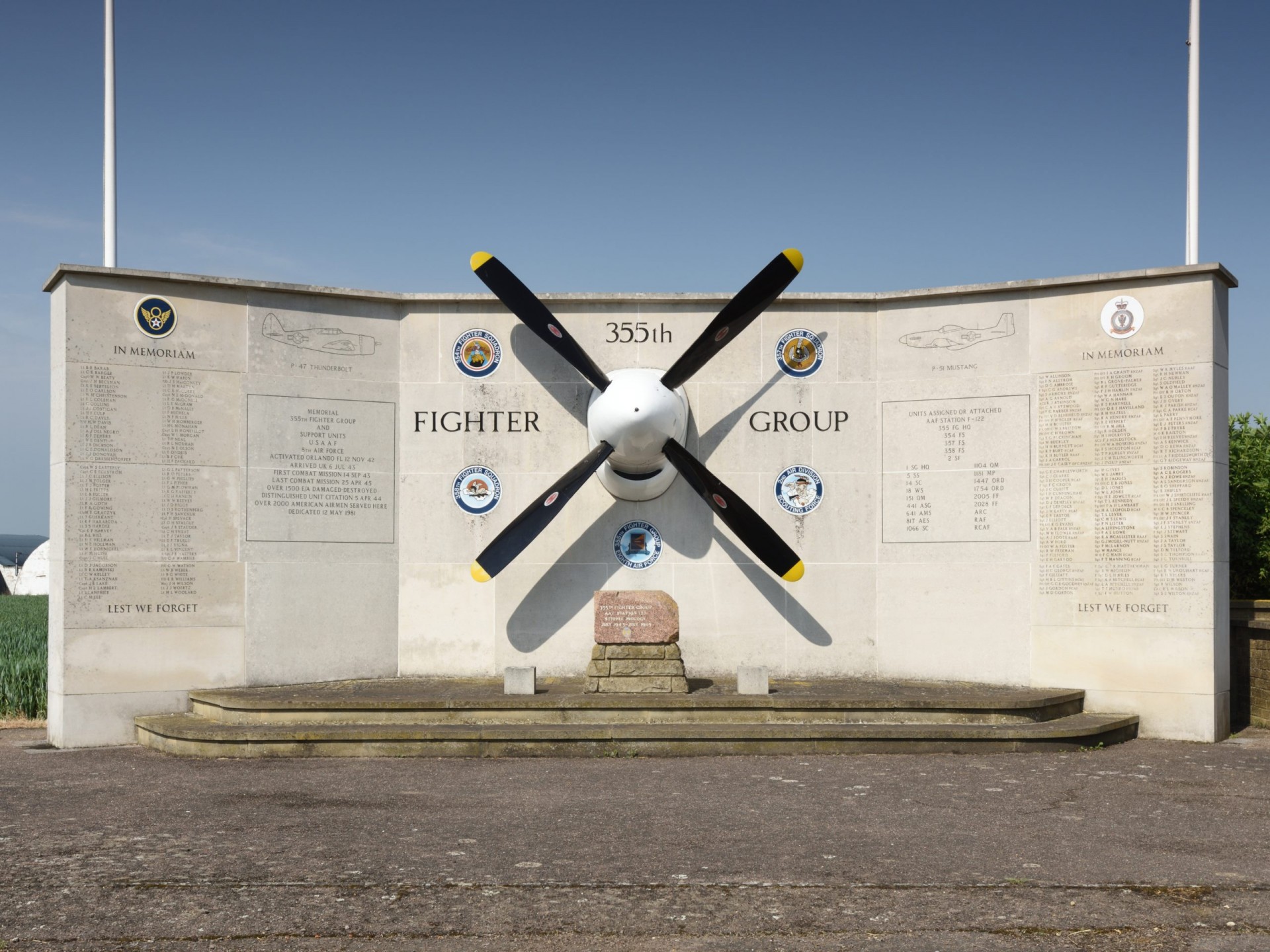 Please follow the link below for more photos in the American Air Museum archive part of the IWM.

If you would like to find out more about the history of Steeple Morden Airfield. These books may be of interest:

A Village Airfield at War

This hardback book concerns the building of the airfield and its occupation by the RAF from 1940 to 1943 by 11. and 17. OTUs, flying Wellington and Blenheim Bombers, in the early part of the war. The book is illustrated with 115 B/W photographs and a fold out map of the airfield.

The story of the airfield continues with the occupation by the 355th Fighter Group and the 2nd Scouting Force. Amply supported by 275 B/W photographs taken at the time plus four pages in colour .The book tells of a remarkable story of courage and dedication with many individual combat reports, stories of escape and evasion, and the courage of the Resistance fighters who helped downed airmen. It also recalls the visit of Glenn Miller and his band who played to one of the largest audiences of the Eighth Air Force. The book contains the rosters and names of aircraft flown, plus a fold out map of the airfield dispersed sites.

The airfield at Steeple Morden was just one of the many airfields built across East Anglia during the Second World War. The first to occupy were the RAF units, 11 O.T.U. and later 17 O.T.U. In 1943 the 355th Fighter Group of the American 8th Air Force took over and renamed it Station F-122. This pictorial book using many unseen photographs tells of the life and times of a small village airfield called Steeple Morden. The book contains over 400 black and white photographs and eight pages in full colour.

You can find out more about which cookies we are using or switch them off in settings.

This website uses cookies so that we can provide you with the best user experience possible. Cookie information is stored in your browser and performs functions such as recognising you when you return to our website and helping our team to understand which sections of the website you find most interesting and useful.

Strictly Necessary Cookie should be enabled at all times so that we can save your preferences for cookie settings.

If you disable this cookie, we will not be able to save your preferences. This means that every time you visit this website you will need to enable or disable cookies again.